What's on your mind?

I'm the new Fandom wiki representative (formerly called wiki managers - there should be a blog post soon about the re-organization explaining more) on this wiki. Please let me know if you need anything.

The Christmas episode where Toby"s father returns gets me every time, to see a father trying to reconcile with his son and the way Toby slowly comes around. this episode is one of my absolute favorites.

I drink from the Keg of Glory Donna, Bring me the Finest Muffins and Bagels in all the land!

Can you help me? In which season/ episode did Dr. Bartlet dress down the White House attorney who addressed her as Mrs. Bartlet? 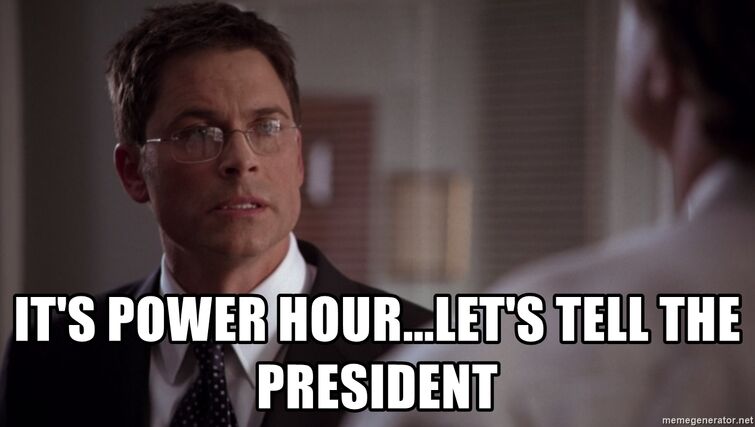 Came across this meme & was wonderin' if Sam actually ever said "Power Hour", & if so, does anyone know the episide he did such? Further if anyone has this clip itself that would be delightful indeed!

I ask because our non-profit community activist center broadcasts every weeknite a Social Justice Power Hour & would really dig addin' this clip to our intro...

Have a wonderful day all y'all!

In the Season Seven episode Election Day Part 1 we see Ronna Beckham kiss a member of campaign staff called Cindy. It is implied that they were havng an affair/campaign fling. I have always struggled with this as it seemed inconsistent with the comment in the episode Running Mates when Ronna Beckham said all her friends were in the room. The other people in the room were Josh, Edie and Lou. So if there was a relationship it was not a long one.

The scene just does not seem to fit it is almost as if they wanted a gay member of the campaign staff but could not work it into the storyline.

I wonder if there will be a soundtrack. for the HBO special that is airing now. IIf not, I am having trouble finding the name of the folk style group that plays somewhere in the middle part of the program.

A West Wing Special to Benefit When We All Vote will premiere on HBO Max on Thursday, Oct. 15.

It's the first time in 17 years that the original cast of the series will reunite, along with creator Aaron Sorkin and executive producer/director Thomas Schlamme, for a theatrical stage presentation of the “Hartsfield’s Landing” episode from Season 3.

A West Wing Special to Benefit When We All Vote will also include act breaks with guest appearances from When We All Vote co-chair/former FLOTUS Michelle Obama, President Bill Clinton, and Lin-Manuel Miranda. Emmy–winning composer W.G. Snuffy Walden will play the iconic score for The West Wing theme song on his guitar, while the folk rock band The Avett Brothers will close out the special.

Watching Season 2 right now. Donna and Josh are so cute! “If you where in and accident I wouldn’t stop for red lights.” I wish they would just date already. I ship them so much.

I was scrolling thru the episode pages and noticed that episodes 7.6 and 7.9 don't have a Summary listed (and 7.7 is only a sentence). Any idea when those will be updated?

Is it just me, or, to a large degree, does Joey Lucas fill the "firebrand PR person" niche left vacant by Mandy's unlamented departure, as well as being an on-again, off-again romantic foil for Josh? I simply find that, with the exception of her first appearance, when I rewatch the show I could easily imagine Mandy in almost every Joey scene, although unaccompanied by Kenny.

Does anyone know exactly how many actors were in both The West Wing and Northern Exposure?

The West Wing has been brought up many times over the years since its series finale as having the potential to return. What do you all think of this and what would you like to see, if it happens?