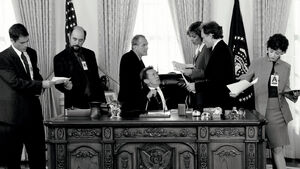 The first season of The West Wing begins part-way through the first year of the administration.

In his first term as President, Josiah Bartlet finds his staff is restless, unable to pass legislation on the hill and with their job approval often lagging in the 40s. To make matters worse, his Deputy Chief of Staff Josh Lyman has just insulted the Religious Right on a national television program. As Bartlet and his staff work together to pass legislation through back channels and dealmaking, Bartlet decides to finally make a stand and attempts to get Roberto Mendoza appointed to the Supreme Court.

While Bartlet is able to get Mendoza on the bench, he still finds himself stuck in neutral until a rousing speech from White House Chief of Staff, Leo McGarry, gets Bartlet to focus on the issues instead of re-election. This leads to a rally in the polls to at least 51%. A few short weeks later, as President Bartlett is leaving a successful speech, shots are fired on him and his staff, with the Secret Service wondering who had been shot. In the wake of the shooting, both President Bartlet and Deputy Chief of Staff Josh Lyman have been hit. While the President is not seriously injured, Josh is critically wounded.

Josh survives, and the staff go on to face a myriad of challenges that include the President's hiring of a staunch Rebublican as an associate counsel, a trip to Portland, the discovery of Chinese refugees fleeing religious persecution, the loss of a costly Mars probe, Josh's post-traumatic stress disorder, and Bartlet's third State of the Union Address. In the November 2000 midterms, the balance of power in congress stays the same, with the Republicans holding both the House and the Senate.

The President is forced to make a deadly decision when it is uncovered that a foreign diplomat is also a terrorist that has plans to attack the U.S. The campaign in full swing, Toby, Josh and Donna are left behind by the motorcade and, through a series of missteps, spend 20 hours getting back to D.C. And that's just the first of many challenges facing Bartlet and his staff. The ramifications of the Bartlet administration's decision to assassinate Qumari Defense Minister Abdul Sharif start to become apparent, as Qumar seeks to use the death to accuse Israel and instigate hostilites.

Meanwhile, everyone is worried about the campaign, as Gov. Ritchie may wind up winning because the public has such low expectations of him, which he can only beat. Bartlet, on the other hand, has the reverse problem. It all comes down to a debate that Bartlet has to win, and win handily - Bartlet does this, securing a "lonely landslide" - he beats Ritchie easily in Electoral College, but the Republicans once again retain control of both houses of Congress as voters split tickets across the country.

Zoey Bartlet has been kidnapped. The President has relinquished office to a Republican Speaker of the House because the vacancy of Vice President had not been filled. After the crisis has been resolved, there is the selection of a new Vice President, the former Vice President’s tell-all autobiography, the shutdown of the Federal government, the rescue of Social Security, a visit from the cast of Sesame Street, the selection of two new Supreme Court Justices and a fact finding mission to Gaza that rattles the Senior Staff to the core.

In mid-2003 the new House Speaker, Jeff Haffley, took on a much more combative approach than his predaccesor and Democrats are further weakened due to concerns about national security and a sluggish economy, leading to a malaise setting in around the White House in 2003-2004 that mirrors the problems the administration faced in its first 18 months. Haffley is able to prevent Bartlet nominating his chosen vice president Lewis Berryhill (instead forcing him to accept Bob Russell as a compromise), torpedoes a Democratic stimulus package, forces the White House to accept tax cuts and spending, and shuts down the government. However, after standing up the Haffley during the shutdown, Bartlet regains some standing. The administration subsequently took on sentencing reform, covertly supports a historic deal on Social Security, brokers a compromise to apppoint two new Supreme Court justices and passing a major new free trade deal in Brussels. In the 2004 midterms, the Republicans again kept control of both houses of Congress. In late 2005 in the wake of President Bartlet securing a historic peace deal in the Middle East, it is mentioned that 57% of Americans would vote for him if he were not prevented from running for a third term.[1]

In the final 18 months of the Bartlet administration, political focus shifts of the presidential election, with contested primaries in both parties and then a close-fought general election between eventual nominees Matt Santos and Arnold Vinick. However, the administration's policies on stem cell research and Cuba, a security leak from the White House about the existance of a military space shuttle, and finally President Bartlet's responses to twin crises at home and abroad in the closing weeks of the presidential campaign (a nuclear accident in San Andreo, California and the need to deploy US peacekeepers to prevent war between Russia and China in Kazakhstan) all become hot issues in the ongoing election to replace Bartlet. Bartlet had an approval rating of 66% even after the shuttle leak[2] and Republican nominee Vinick paid tribute to him in his convention speech in an effort to court pro-Bartlet voters.[3]