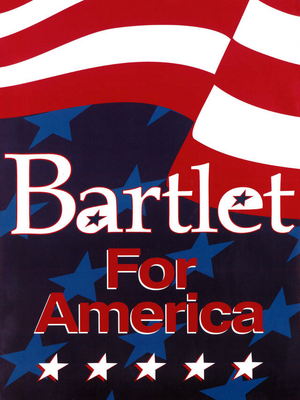 Bartlet For America is the 1998 Presidential Campaign run by Josiah Bartlet and Leo McGarry, his campaign manager, for the Democratic nomination for President of the United States.

Leo McGarry, following his tenure as Labor Secretary in the mid-'90s, sought out his old friend, then-Governor of New Hampshire, Jed Bartlet, to encourage Bartlet to run for President. McGarry coined the campaign title and slogan, writing down the words on a cocktail napkin which he presented to Governor Bartlet. Though Bartlet hesitated at first, he ultimately decided to run.

With McGarry in the lead, the campaign team consisted of Cal Mathis as a point man, along with campaigners Jerry, Mack and Steve. Toby Ziegler was hired by Leo and this was his introduction to the Governor, who was familiar with the other 4 campaigners. After a while of a slogging campaign, in which the team was more concerned with politicising than content, Leo got fed up and fired the lot, save for Toby, at a Nashua campaign event in October 1997.[1] Ziegler was very surprised, given he'd expected himself to be the sole campaigner fired and had spent the morning getting drunk at a bar as a result of his assumption.

Retrieved from "https://westwing.fandom.com/wiki/Bartlet_for_America_(1998)?oldid=28028"
Community content is available under CC-BY-SA unless otherwise noted.