Template:EpisodeNewTitleStory Presidential chief of staff Leo McGarry needs five more House votes to pass a bill restricting the sale of automatic firearms -- but the cost might be too high, especially if he has to go to the unpredictable Vice President to help put them over the top. The staff's annual financial disclosure statements prove to be thorny for Toby, whose innocent technology stock purchase last year proved to be wildly profitable, which raises eyes due to his association with an expert in the field. In addition, Leo's long hours on the job cause an unforeseen crisis at home, and the President unintentionally mixes up the potent medications he receives for his ailing back.[1] 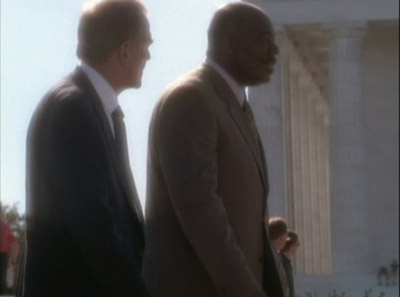 While President Bartlet delivers a speech priding the inevitable passage of a House bill concerned with gun control, his staff learns that said passage now may not be happening--the latest count places the the bill coming up short by five votes.

Leo McGarry calls an emergency meeting of the senior staff that last well past midnight. Leo instructs C.J. Craig to play up the release of the staff's financial disclosure report the following day to provide cover for them to work on getting the votes. Sam suggests using the Vice President, but Leo shoots down this idea. When Leo finally arrives home, he finds his wife still awake, having expected Leo home hours before. He also realizes he has completely forgotten it was their wedding anniversary.

The disclosure report brings with it a number of comical revelations (including a valuable "smoking jacket" given to Josh from an ex-girlfriend). It also brings with it some trouble--the report reveals that a stock Toby invested in went from $5000 to over $125,000, soon after he had arranged for a friend to testify before Congress about stocks. Toby insists he had no idea what his friend was going to testify about, and it was an innocent coincidence. Nevertheless, with the report being made public, there there is concern he may be indicted on federal charges of manipulating the stock market.

Josh manages to strong arm one of the five defecting Congressmen into getting back in line by threatening that the President will not endorse him in the Midterms. This action prompts two other defectors to switch their votes back. Josh then meets with Congressman Christopher Wick, an old college fraternity buddy, whom he angrily confronts about going against the President. Wick replies that he broke ranks to prove he's not on a leash, but he'll change his vote again for a photo op with the President. Josh complies.

Leo again vetoes the suggestion of using Hoynes to speak with Texas Congressman Cal Tillinghouse. Instead, Leo approaches an African American Congressman with an appeal that the gun ban will save African American lives. The Congressman rebuffs Leo, saying the law has no teeth and is nothing more than for show.

Leo reluctantly must now turn to the Vice President. He schedules the meeting for late, wanting to spend most of the evening with his wife to make up for his lapse the night before. When he arrives home, however, he finds Jenny with her bags packed. She announces she's leaving him, that she can no longer bear the life they have. Leo, distraught over the thought of her leaving him, stills insists his job is more important than their marriage.

Shaken, Leo meets with Hoynes, who immediately realizes something is wrong. Leo confides in Hoynes, and the VP tells Leo about a secret AA meeting he hosts with several other prominent politicians and administrators, inviting him to come. He also says he will be happy to speak with Tillinghouse.

The following day, Hoynes makes good on his promise, convincing Tillinghouse to go along with the bill as a personal favor to him, stating directly that he "will be President one day." He also encourages Tillinghouse to speak with the four other Congressmen who were compelled to vote yes (all of whom are looking for a little political retribution). After the bill is signed, all five of the Congressman pile the credit upon the Vice President, making the victory more hollow for President Bartlet. Josh congratulates Hoynes on a game well played.

Does Martin Sheen almost kill the "walk and talk" at the beginning of the show? As the ensemble nears the exit of the building, Sheen delivers his line about Toby being a 'pain the ass'. If you listen carefully there is a groaning sound - Charlie jumps in with "Mr President" and Sheen replies "Oh yes, Charlie, by the way - did the first lady call?" Had Sheen forgotten his line and Hill jumps in to try and save the scene? You decide!

Leo's home in the Pilot epsiode, had a lawn and appeared suburban. Here, it's in a street looks urban.

Josh Lyman: You know, I'm so sick of Congress I could vomit.

President Bartlet: [on his speech] Yes, I did a little polish right up there on my feet. Right in front of everyone. I looked at the side at one point, you know, and I half expected to see you coming at me with a salad fork.
Toby Ziegler: Well, but for the secret service agents restraining me, sir.
President Bartlet: Thank God for the secret service.

C.J. Cregg: I thought it was inspired!
Toby Ziegler: Why do you keep saying stuff like that?
C.J. Cregg: Just to watch your face turn that color.

Toby Ziegler: There's literally no one in the world I don't hate right now.

Sam Seaborn: So how do you feel there, big guy?
Toby Ziegler: Like I just got screwed with my pants on.

Retrieved from "https://westwing.fandom.com/wiki/Five_Votes_Down?oldid=8069"
Community content is available under CC-BY-SA unless otherwise noted.