Jon Hutman
EMMY WINNER HAL HOLBROOK GUEST-STARS; PRESIDENT FACES CRISIS WHEN SPY SUB FALLS SILENT -- When an American spy submarine suddenly goes silent in hostile North Korean waters, an angry President (Martin Sheen) receives advice from the Assistant Secretary of State (Emmy Award-winning guest star Hal Holbrook, "The Bold Ones") and must decide whether he should notify the enemy or attempt a risky, secret rescue -- while his wife, Abigail (Stockard Channing), learns that her past malpractice suits might be Bartlet's Achilles heel in his criminal investigation. In other White House action, C.J. (Allison Janney) is ecstatic over a potential presidential candidate's indecisive public remarks; Toby (Richard Schiff) meets with a representative from an appropriations committee who wants to funnel money away from Congress' controversial funding of avant-garde artists.

C.J. is in her office when Carol arrives - she tells C.J. the Majority Leader got a question, "Why do you want to be President" and the response from the Majority Leader was completely non-sensical.  C.J. comes to see Toby to tell him about the quote.

The President arrives in the Situation Room with Leo and after hearing the various scenarios and updates - tells Nancy and the rest of the National Security Team - they have four hours to find out what's going on.  On the way back upstairs - Leo tells the President that they will need to talk with someone from the State Department, he's going to call for Albie Duncan, who has been at the State Department for decades.

Bruno and Connie arrive for a strategy meeting with Sam and Toby - Bruno wants to start a campaign effort using soft money, which Sam is against.  Toby arrives at the meeting trying to figure out what 105 million dollars for the National Park Service means after reading the figure in the budget estimates.  C.J. tells Toby that $105 million is the same budget amount for the National Endowment for the Arts.

Oliver Babish arrives in his office for yet another meeting with the First Lady.  He informs her there are several former patients of Abbey on the witness list for the Congressional Committee - and he realizes (and tells Abbey) the biggest liability for the President is going to be the First Lady.

Toby meets with a Congresswoman who is spearheading the zeroing out of the Endowment's budget.  Sam comes to see Toby to tell him what Bruno wants to do.  C.J. grabs Sam to tell him about the Majority Leader's answer to the question - she also wants to make sure the President can answer the question well.

Oliver and the First Lady continue their discussions - she wants to know how mounting a campaign to discredit her hurts the President - she realizes that going after her will distract the President and take the light away from the campaign.  Abbey asks Oliver if there is a deal to be made and what it would cost her.

Albie Duncan arrives to meet with the President and Leo about the submarine.  The President doesn't like Duncan, because he tends to scold the President on his inexperience.  Duncan warns the President they can't tell the North Koreans about this as it is an agressive action and a cause for war.  They decide to wait for the four hours (now three) to pass before taking any other actions.

C.J. comes to Josh with the transcript of the Majority Leader's interview - C.J. asks Josh about their answer, which Josh is not sure if they have one - C.J. asks him to check, please.  Sam comes to find Toby again (who is still arguing with the Congresswoman about the NEA) and asks him to come to the meeting with Bruno and Connie.  Toby agrees to using soft money - but he wants to see an ad first.

C.J., Josh, and Donna get working on answer to the question for the President.  Toby and the Congresswoman continue to discuss the funding for the NEA - she wants to divert the money to National Parks security.  She finally tells Toby what she wants - she wants the head of the Endowment to be fired and they'll find the National Parks money elsewhere.

Abbey suggests to Oliver that she agree to a suspension of her license and that might be enough - Oliver tells her that it's not enough - she needs to testify, admit to the breaking of the laws and the code of ethics - then it can be put behind her.

Sam, Bruno, and Connie are working on an ad spot that doesn't include any of the "buzzwords" that can't be used  in a soft money ad.  Sam is increasingly agitated over the skirting of campaign laws - Toby arrives and listens and decides they need to create and run a real issues ad - not a campaign spot.

The President has hit his limit with Duncan and heads for the Situation Room to launch a rescue effort.  When he arrives - the Portland has radioed in - it had gone quiet to avoid detection by a North Korean destroyer.  The President returns to the Oval Office and confirms with Charlie that his papers were filed.

C.J. meets with the President and asks him if he has an answer to the question - he's still working on it.

〉We all need some therapy because somebody came along and said liberal means soft on crime, soft on drugs, soft on Communism, soft on defense. And we're going to tax you back to the stone age because people shouldn't have to go to work if they don't want to. And instead of saying "Well, excuse me, you right-wing reactionary, xenophobic, homophobic, anti-education, anti-choice, pro-gun Leave-it-to-Beaver trip back to the 50s", we cowered in the corner and said, "Please. don't. hurt. me."... Let's have two parties〈
—Bruno Gianelli

Josiah Bartlet: It got filed?
Charlie Young: Yes sir.
Bartlet: It got filed.
Charlie: Yes sir.
Bartlet: So I'm on the ballot in New Hampshire.
Charlie: Yeah.
Bartlet: Okay (beat). When Romans ran for the office of consul (Charlie rolls his eyes)...did I just see you roll your eyes?!
Charlie: No sir.
Bartlet: They wore whitened togas to show their intent. A bit silly, perhaps.
Charlie: Perhaps?
Bartlet: But it was an act of personal commission...
Charlie: Mr. President?
Bartlet: What?
Charlie: I know how much you like to think of yourself as a man of the people - Roman references and all - but you're the only person who can launch our nuclear weapons. You travel in a fully secured perimeter. You rescue submarines. Maybe it's time for it to be okay that an aide delivers a piece of paper.
Bartlet: You're pretty mouthy today.

C.J.:  Can you answer it?
Bartlet:  Why do I want to be President?
C.J.:  Yeah.
Bartlet:  [exhales deeply] I've been thinking about it for the last couple of hours.  I almost had it.
[C.J. stares at the President] 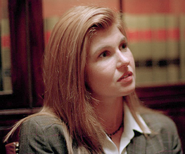 Retrieved from "https://westwing.fandom.com/wiki/Gone_Quiet?oldid=29291"
Community content is available under CC-BY-SA unless otherwise noted.