Christopher Misiano
Josh goes to New Hampshire with Santos to set up their campaign headquarters.  From the very beginning, there are problems with setting up the office in an abandoned shack and personal differences about the campaign's goals are immediately evident.  Meanwhile, as Donna and Will work together on Russell's campaign, Will makes it clear to Donna that in order for their partnership to work, she needs to acknowledge that Josh is gone.

Josh meets with Senator Butler.  Josh tries to convince the Senator to meet with Congressman Santos, but the Senator is reluctant, as he does not believe that Santos can win.  Josh arrives at the home of some New Hampshire fundraisers, where Congressman Santos is already inside.  He talks with Ned (another of the Congressman Santos' Congressional staff), who tells Josh that Will Bailey wants to talk to him.  Ned suggests to Josh that Doug Westin might want to endorse Congressman Santos.  Josh tells Ned to call and see if Lizzie Bartlet has a few minutes to meet with Josh.  Ned then tells Josh that Greg Brock, from the New York Times is waiting to talk to him.  Josh goes over and talks to Brock.  Brock tells him they are hearing things from Houston.  Josh isn't concerned and goes inside.

Josh tries to get Congressman Santos to dial the education policy talk back and pulls him out of the room.  They have a discussion on the porch.  Josh makes several suggestions about tactics they should try (and may have to try).  Congressman Santos counters with his own ideas and reveals to Josh that he is micromanaging the campaign (reviewing daily spending reports).  Josh suggests they may need to do some opposition research on the other candidates, but Congressman Santos is adamantly against that.

Josh arrives at the Bob Russell headquarters to meet with Will.  Will picks up the phone and asks his assistant to come in, who turns out to be Donna.  Josh and Donna share an awkward moment.  Will proposes a clean campaign, no attacks by the other candidates.  Josh tells him that he will take it to Congressman Santos.

Back at the headquarters, Josh is talking with Santos about scheduling.  Santos still wants to give speeches to more than a few people at a time, but Josh stresses that this is how votes are won in New Hampshire - one by one.  Lizzie Bartlet arrives to see Josh, and the two go off to talk, while Santos takes a phone call.  Josh asks Lizzie to give Santos a chance.  He doesn't want Doug's endorsement, just a photo-op to give the idea that the primary is wide open and not a lock for Russell.  Lizzie tells Josh to have Congressman Santos at a local diner in an hour and a half.

Arriving at the diner, Josh sees the Congressman shaking hands, while they await the arrival of Doug Westin.  Brock comes up to Josh to tell him that the UNH professor the Congressman has been talking to on education has leaked the education plan to the AP.  Brock also shows Josh an old quote of remarks by Congressman Santos about the New Hampshire primary.  Josh goes over to talk to the Congressman about these two latest gaffes, and then Doug and Liz arrive.  Doug has sharp words for Santos about the quote but the two enter the diner together.  Doug Westin is questioned about his race and his position on snowmobiling, then Brock asks Santos about the quote on the New Hampshire primary.  Westin also questions Santos, who refuses to back down.

Santos, Josh, Ned, and Ronna return to their motel and Josh and Santos have a conversation.  Josh makes it very clear that he understands this is not what the Congressman expected, but that in New Hampshire and at this early point in the campaign, he is going to have to let Josh run things.  The conversation starts to escalate into a full-blown argument and Santos leaves the room.

Josh meets with Joey Lucas, who has flown into New Hampshire, at Josh's request.  They talk about what Joey can do for the campaign, despite the fact that the campaign has little money, or ability to run polling.  She gives him the first of some opposition research.

Josh and Santos arrive at a Senior Center to meet with New Hampshire's oldest voter, so Santos can take back the quote about the Mayflower.  They walk in and learn that the gentleman died.  Santos tries to make the best of it and goes in to meet with the residents who are there (and alive).  Brock comes up to Josh and tells Josh that the press aren't there to cover Santos:  they're covering Josh.

Josh comes to see Will and confronts him, accusing him of leaking the quote to the press.  Will points out that eventually Josh is going to be working for Russell and he's just trying to get Josh on board and away from a failed campaign with Santos.  Josh leaves for a campaign appearance for Congressman Santos.  Donna arrives soon after and she and Josh have a conversation and she then tells him why they are there:  to present Congressman Santos with letters from New Hampshire residents asking to protect the primary.

Josh returns to the Campaign headquarters and gets a call from President Bartlet.  The President tells Josh that he is glad that Santos is talking about education, because he [Bartlet] hasn't done enough.  The President gives Josh some numbers, which Josh writes down, but then quickly destroys.

Josh is talking with reporters over the education plan in the campaign headquarters.  He gets up and goes outside to talk with Santos.  Santos has learned that Josh paid Joey Lucas for some opposition research and he wants to know why Josh was digging for stuff on the other candidates.  Josh tells him it wasn't on the others:  it was on Santos.  The two argue about Santos' dedication to the campaign.

Ronna tells Josh that the other candidates have all come out with education plans in response to Santos talking about the issue.  Liz Bartlet comes to see Josh, and she gives him a contribution to the Santos campaign.  Josh explains that this will be reported and that people will know that a member of the Bartlet family made a contribution to the Congressman.  Liz says she knows that.

Matt Santos: I almost wish we could have a campaign slogan without my name in it.
Josh Lyman: Yeah, "For President." Catchy. Probably cut both ways…

Josh Lyman:We need to sell you first, then we'll get to the big issues.

Greg Brock: We're not writing about Santos. We're writing about you. Why you're running this quixotic campaign, why you're splitting up the field.
Josh Lyman: We're running to win
Greg Brock: By thumbing your nose at the first primary? By proposing the largest expansion of education in a state that can't afford notebooks?
Josh Lyman: We're talking about the big issues.
Greg Brock: I think you're siphoning off votes to help Hoynes. Why else would Russell's folks be worried about you?

Matt Santos: We're lucky if we have two months with this!  I don't want to waste it shaking hands!
Josh Lyman: (long beat) Two months?  I gave up everything for this, and you're not even in it to win?
Matt Santos: Maybe we have a different definition of winning, Josh.  Maybe that's what we should have talked about in Houston. 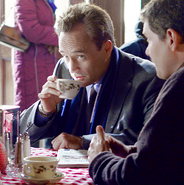 Retrieved from "https://westwing.fandom.com/wiki/Opposition_Research?oldid=27252"
Community content is available under CC-BY-SA unless otherwise noted.