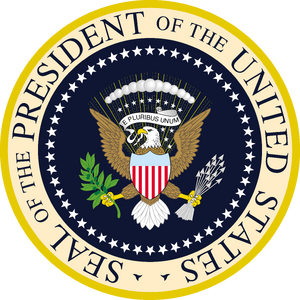 The President of the United States, or (POTUS) for short, also known as The Commander in Chief or even The Leader of the Free World, is the head of government and state for the United States of America. The country's first president was George Washington, who served from 1789 to 1797. Washington was originally offered a monarchical title, but instead determined the country should have a president, duly elected by the people.

Josiah Bartlet is the President of the United States for the entire series. His successor, Matthew Santos, is inaugurated in the series finale, Tomorrow. For a short time in Season Five, House Speaker Glen Allen Walken becomes acting president.

Below is a list of Presidents of the United States. Obviously, at some point the history and the fiction become entangled as President Josiah Bartlet was elected in 1998, which was not a year in which the quadrennial presidential election would have taken place in real life. Additionally, the identification of at least two known predecessors to President Bartlet (D. Wire Newman and Owen Lassiter), further blurs the office holders. Richard Nixon is the last real-life President to have been mentioned on the show. Visit the Timeline for more information.

This chart lists known individuals who served as President of the United States.

This chart lists episodes where each president is most prominently referenced or mentioned in the series. Some presidents have never been mentioned.

Retrieved from "https://westwing.fandom.com/wiki/President_of_the_United_States?oldid=29750"
Community content is available under CC-BY-SA unless otherwise noted.