Lowe was first billed and originally going to play the main role in the show. However, after Martin Sheen was cast as the President and became a member of the main cast, Lowe's character was downgraded to a supporting role. Lowe left the show midway through the fourth season and returned for a small arc at the end of the seventh season as part of the Santos campaign.

Lowe has also appeared starred on the television programs The Lyon's Den, Brothers and Sisters and Dr. Vegas and several movies including The Outsiders, St. Elmo's Fire, Youngblood, About Last Night, Wayne's World, Contact, Californication and Thank You For Smoking. Another major role he had was in NBC's Parks and Recreation. Lowe has been nominated for two Golden Globes and an Emmy for his role on The West Wing. 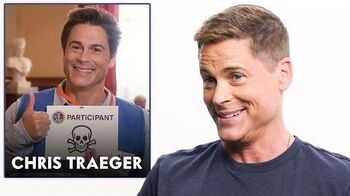