PRESIDENT'S NOMINEE FOR SUPREME COURT JUSTICE HITS A NASTY SNAG -- When a Supreme Court justice retires, President Bartlet (Martin Sheen) has a golden opportunity to impact the court's composition by nominating a favorite judge (guest star Edward James Olmos) -- but when further study reveals the candidate's conflicting ideology and cloudy social affiliations, the President might change his mind and opt for another judge. In addition, a headline-seeking congressman (guest star Holmes Osborne) on the House Government Oversight Committee accuses the White House staff of substance abuse -- a dicey issue for one important member.

As the episode opens, Josh Lyman and C.J. Cregg are in Josh's office on the phone. The call concludes with Josh telling the person on the other end to wait by the phone to expect a call from the President. Upon hanging up, C.J. and Josh celebrate, yelling, "it's DONE!" They walk over to the Oval Office and are joined by Toby Ziegler and Sam Seaborn. They tell the President that the person Josh was talking to is waiting for the call. Leo congratulates the President on getting "a Supreme Court nominee." As the senior staff leave the Oval Office so President Bartlet can make the call, Toby begins to marshal the troops because, "I am going to put Harrison on the Supreme Court!" Donna and Josh walk back to his office discussing the merits of Judge Harrison and as they sit in his office, a piece of the ceiling falls on Josh's desk, immediately after his pronouncement of a "smooth confirmation."

In the next scene, President Bartlet is speaking with Justice Joseph Crouch (played by Mason Adams ), whose retirement has given Bartlet the opportunity to appoint a new Justice. Crouch chides Bartlet, asking if Mendoza had been considered instead of settling on Harrison. "I wanted to retire five years ago. Five years. But I waited for a Democrat. Instead I got you" Crouch says to Bartlet. He wants Bartlet to take "the next few days and give Mendoza the consideration he deserves."

Sam and Toby continue to vet Harrison and begin working on remarks for President Bartlet when Harrison is introduced. As they are talking, on the television, Congressman Lillianfield is bemoaning the loss of distinguished members of White House staff. He then makes the accusation that 1 in 3 members of the White House staff use drugs on a regular basis. The Senior Staff meet to discuss how to respond to Lillianfield's accusations - Josh is going to "investigate" the accusations of drug use in the White House or as Toby puts it, "What do we know, what do they know? - Get it done."

Sam receives a phone call (waking him after he fell asleep reading Harrison's legal writings). After listening to the person on the other end, he agrees to meet the person and leaves his office in haste. President Bartlet goes by Toby's office to ask him to make sure that Menodoza was given the full scrutiny. Toby says the reason "we didn't pick him is because Harrison said yes." The President tells Toby, "Let's do better than that."

Shortly after, Sam returns and tells Toby there is a problem with Harrison. Harrison appears to have been the author of a memo on privacy issues. After informing the President, Bartlet tells Leo that he wants to meet Mendoza. In the meeting with the President, Harrison acknowledges that he wrote the memo. The President tells Harrison that Sam and Toby are going to come in and discuss this with him. The President, Toby, and Sam quiz Harrison on various issues, primarily the right to privacy. They decide that Harrison cannot be selected and they decide to meet with Mendoza. After a conversation, President Bartlet informs Mendoza that he intends to nominate him as an Associate Justice of the Supreme Court.

Josh comes to see Leo and asks if there is something other than Leo's alcoholism that might have gotten Lillianfield sniffing around. Leo confides to Josh that he had a problem with pills and that six years ago he was in treatment in Sierra Tucson. Josh tells Leo that he believes Lillianfield has those records. Josh vows to protect Leo and make it alright. Leo informs the President that Lillianfield has records of Leo's treatment - the President assures Leo that we will get through this.

〉5 White House staffers in the room... I'd like to say to the 1.6 of you who are stoned right now that it's time to share〈
—Josh 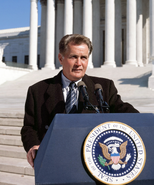