The West Wing Weekly is a podcast created by Hrishikesh Hirway and Joshua Malina. It premiered in March 2016 and concluded in January 2020.[1] 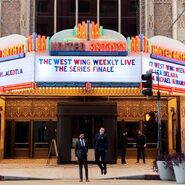 Retrieved from "https://westwing.fandom.com/wiki/The_West_Wing_Weekly?oldid=29919"
Community content is available under CC-BY-SA unless otherwise noted.