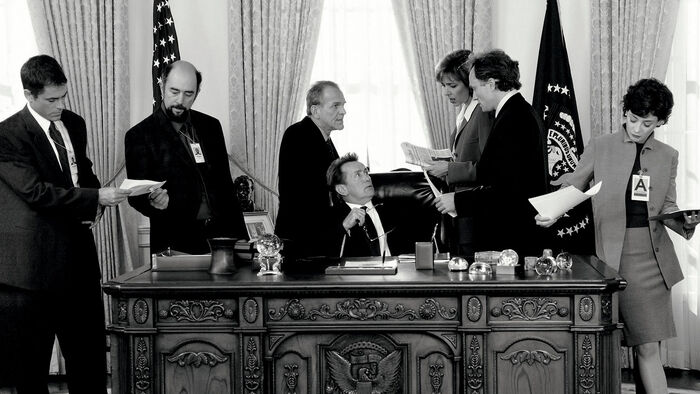 Because the writers did not map out a historical backstory for the show, there is no definite timeline that can be created. Often times due to production oversight, there are contradictions and plot holes. Many people over the years have used scraps of information scattered throughout the series to create their own backstories between the resignation of Richard Nixon and the election of Jed Bartlet. There are presumably several fictional Presidents after Nixon, but most have never been mentioned in the show. Only two former presidents are revealed: D. Wire Newman, a one-term Democrat, and Owen Lassiter, a two-term Republican. Newman and Lassiter were designed similarly to real-life presidents Jimmy Carter and Ronald Reagan, respectively. The placements of their presidencies are ambiguous, but there are hints. Newman used the same Air Force One plane as Bartlet, indicating a presidency during the late '80s. Lassiter and his staff members are all very elderly in 2004, so his presidency could be placed in the late '70s or early '80s.

As Richard Nixon is the last President to be referred to in the show, the most popular timeline is that President Nixon resigned before he appointed Gerald Ford as his new VP or that his VP nominee was not confirmed by the Senate, therefore, there was no Vice President to assume the presidency. The theory goes on to say that the Speaker of the House (Carl Albert at the time) took office while the country decided to hold a special election to elect a new President rather than have the Speaker finish off Nixon's term.

The following facts can be proven by information in the show.

While many historical events are mentioned throughout the show, we find that the show itself does not follow the real-life timeline. Bartlet was elected in 1998, 2 years prior to the election of George W. Bush. The show ends with the election victory of Matt Santos in 2006, 2 years prior to the election of Barack Obama. The creators of the show left the timeline ambiguous in order to separate it from real-life, and to create their own alternate universe. In the series, no president after Richard Nixon exists in real-life. There are overlaps, as many policies implemented throughout the '70s and '80s exist in the show, but the presidents who created them do not.

Retrieved from "https://westwing.fandom.com/wiki/Timeline?oldid=29463"
Community content is available under CC-BY-SA unless otherwise noted.